I'll dig with it. 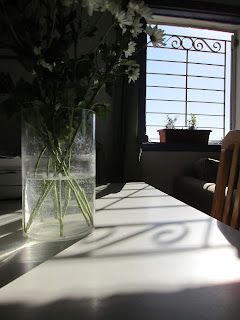 "What a gift, since my life so often feels like a hallway of closed doors"

The quote above comes from this post in The Toast. The Toast is one of my favorite new websites. It's intelligent and weird and whimsical and funny. (If you haven't yet read Texts from Miss Havisham, you have not yet lived). Anyway, I've been thinking about that post a lot as Rosh Hashana came and went. I've been thinking about doors and gateways and keys that lock and unlock.

This year, my friends, this year has been hard. It's been hard emotionally and financially and just all around stressful. The thing is though, I also think that this year has been an important year. Maybe it was a key or a gateway-something to go through until you reach the other side; something to unlock hidden things. So that they become what they are. Maybe one day I will look back and think, yes, that year, that hard year, was the year. It made me. It's getting there already, wherever there is. I have a new job. I like it (knock on wood. spit over your shoulder). I have a new roommate. So far, so good (knock on wood, spit over your shoulder). It's a bit easier to breathe now, like a key halfway turned inside of me. 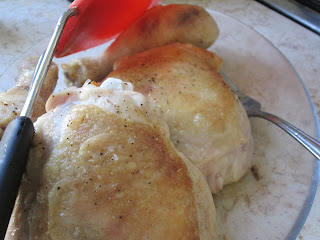 I've also been thinking a lot about Seamus Heaney, lately. It's only natural. He was my first poet. No, that's not true. My first poet was probably Yeats or Blake or any of the other poets my father tried to make us love while we rolled our eyes. I wasn't introduced to Heaney until I was in college. But still, he was the first poet to make me really think about poetry- about how specificity of language, and place and sense could yield something universal. You didn't grow up in a farmhouse on the fault line between the modern world and the past, with nature steadily creeping in to all your rhythms and associations. You have never heard the sound of someone cutting sod. And yet, you are there in those moments that Heaney remembers for you. You are present in a memory and feeling that isn't specific to you, but is somehow yours anyway. 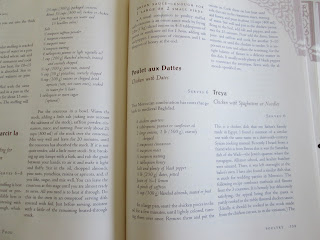 I was saddened when I heard that he had passed on. It felt as if the world had lost a truth-teller, and if there is anything we need right now, it is a teller of truths. So I re-read Station Island, aloud, as these things should be read, and it has followed me into the new year:

"...'Your obligation
is not discharged by any common rite.
What you do you must do on your own.

The main thing is to write
for the joy of it. Cultivate a work-lust
that imagines its haven like your hands at night

dreaming the sun in the sunspot of a breast.
You are fasted now, light-headed, dangerous.
Take off from here. And don't be so earnest, 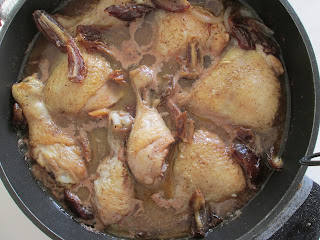 The following recipe was meant to be part of my Rosh Hashana menu. This post was also meant to be posted before Rosh Hashana. Neither of those things happened. The first did not happen because I was feeding vegetarians and as such, didn't make chicken or meat for Rosh Hashana. Like at all. It was weird at first, but all in all, my meals turned out lovely, the food was good and a good time was had by all. The second did not happen because life is sort of hectic at the moment.

In any case, this recipe isn't just for Rosh Hashana, in fact, I think the first time I made was a Passover, many years ago, but it is sweet with honey and dates, tempered with the tartness of lemon and the sharpness of a good amount of black pepper. That's a hope for the new year- may it be sweet and sharp.

Adapted from The Book of Jewish Food by Claudia Roden

1. In a large pan,  heat the oil over a high heat. Brown the chicken quarters until lightly golden -about three minutes each side. When, brown, remove them, turn the heat to low, and add in the onions. Cook until soft. Add the cinnamon, allspice, nutmeg and honey and about 1 3/4 of a cup of water. Stir and return the chicken to the pan. Bring to a boil, add a healthy pinch of salt and a lot of freshly ground black pepper. Lower the heat again and simmer for 25 minutes.

2. After 25 minutes , add the dates, lemon juice and saffron. Cook for another 10 minutes until the chicken is tender. Remove from heat and serve.
Posted by Rogue Unicorn at 7:55 PM