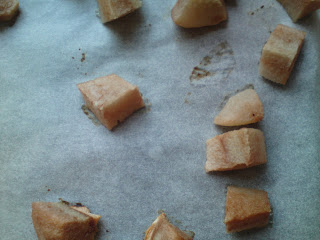 Last month, when I was in Chicago, my oldest friend gave birth to her third child.  It was nice to be able to be around for such a joyous occasion and to be able to meet the little munchkin (see below) who I'm fairly certain will grow up to be just as fat-cheeked, precocious and funny as her two older siblings. It was nice to feel, if only for a few days, like I could contribute to this community of old friends in a real, tangible way (as opposed to my usual virtual contributions).

Nick is literally my oldest friend. We've known each other since infanthood and from the time we entered pre-nursery to the time we graduated high school, we were pretty much inseparable. We did everything together. We were in the same class in elementary school, we went to summer camp and summer school together. Our parents attend the same synagogue, and on Saturday afternoons, either she was at my house, or I was at hers. She has an older brother my brother's age and a younger brother my sister's age. Our families just sort of fit together. We just sort of fit together. We read the same books. We played vividly imaginative games in the stands of trees in the park we called "the woods". We did strange art projects. At summer camp we protected each other- from the mean girls, from the burden of having to fit in. We both grew into smart, bookish, slightly introverted teen-agers with a core group of friends in high-school- women we still count as friends. It was good for both of us, I think, to find that we had a group; that there were like-minded people in the world. And it was good, certainly for me, that even in our group there was one person who knew me forever and ever. And while after high-school our paths diverged some, they never diverged totally. Because even though I live in Israel and she lives in Chicago, and even though I am a single woman, a refugee from academia, doing my words and food thing, with nothing to tie me down but my cat and my own unwillingness to move, and she is a mother of three, with a husband and house and a dog and degree in special education, she's still one of my best friends.

So maybe it was more than nice to have been there when her baby was born, maybe it was moving. And maybe it was moving to walk through her very adult house, with her adult kitchen and her adult furniture and her kids running under-foot and find little remnants of my childhood scattered about. A painting I painted for her hangs in her children's room. The mantel in the stairway is home to a little, odd misshapen candle- a souvenir from summer camp. And it's odd sort of thing to see your own history displayed like that in a house that isn't yours. It's an ache and a joy all and rush of care and love all at once. It's old, old friends. The oldest. And there I am, holding her baby, who's only a few days old and warm and light against my shoulder and her son and her daughter are running through the house, saying, Mommy, Mommy. Who would have thought we'd be here, in this moment? Really, who would've thought it could happen?

I made Nick and her family fried fish, glazed carrots, green beans, and scones. I make scones often-  usually Alice Water's recipe- because they're easy and they're good and they make me feel British. But a few weeks prior to my trip to Chicago I saw Deb's recipe for roasted pear and chocolate chunk scones over on Smitten Kitchen, and I couldn't not make them. Feeding Nick's family seemed like all the excuse I needed. Afterwards, Nick asked for the recipe. I told her I'd blog it. So here I am blogging it. Nick, give those kiddos kisses from me and then go make some scones. xo. 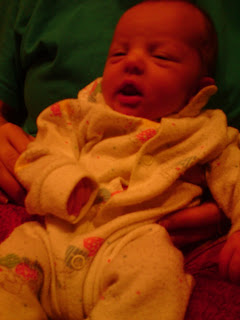 1. Preheat the oven to 375 F.  Arrange the pears on a baking sheet that has been lined with parchment paper. Roast until they are browning a bit and have lost a bit of moisture- about 20 minutes. Remove from oven. Cool.

2. In the bowl of a stand mixer, sift together, the flour, sugar, baking powder and salt. Add in the butter, cream, pear chunks and 1 egg. Mix on low using the paddle attachment, until a wet dough forms. This will only take about a minute- maybe less. Add the chocolate. Mix for 5 more seconds until just encorperated.

3. Pour the dough out on to a well-floured surface and pat into a 6-inch round. It will be sticky. Fear not. Cut into 6 even wedges. Place the wedges, well spaced on a parchment-lined baking sheet.

4. In a small bowl, mix together the remaining egg, a drop of water and a good pinch of salt. Brush the wedges with the egg wash and then sprinkle them with remaining the tablespoon of sugar. Bake until golden, 25-30 minutes.

Posted by Rogue Unicorn at 7:06 PM