The trials and tribulations of cheesecake 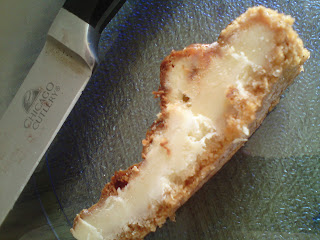 I am a cheesecake purist. I want my cheesecake to be nade cream cheese, eggs, sugar, vanilla and maybe a little bit of lemon zest- nothing more and nothing less. I don't believe in cream or soft white cheese or gelatin or, heaven fore-fend, pudding mix. My cheese cake shouldn't taste of chocolate or caramel or passion-fruit. It should be dense. It should be creamy. It should taste pure, with a bit of tang. It should require a cup of coffee- because there is nothing better in this world than a slice of cheesecake and a cup of coffee. On this we can all agree.
Loving cheesecake as I do makes living in Israel difficult sometimes. Israelis like their cheesecake to taste like air. They are enamored of no-bake cheese cakes and light and fluffy things made with everything but cream cheese. These things are abominations. And here's the worst of it, even if say, you wanted to make a proper cheesecake all of your own it nigh near impossible. Israeli cream cheese, just isn't...right. It's not dense and it has too much tang and not enough smoothness. It is not proper cheesecake making material and is only marginally acceptable when eaten on a bagel (with or without lox-your call). Good old American cream cheese (of the Philadelphia variety) can be found, but it is prohibitively expensive. 8 ounces of the stuff runs about 20.00 shekel (about 5 dollars). That's at least 40 shekels worth of cream cheese per cheesecake.
My cheesecake-less situation has been a sore subject for all the years I have live here. But, last  year I began to hear rumors that one could make their own cream cheese with nothing but a cheesecloth and some time. I was intrigued and this year I decided to give it a try. The various Israeli blogs and resources that I looked at recommended straining שמנת חמוצה- what passes for sour cream-overnight. I had nothing to lose.  A small 200 gram carton of sour cream costs 2 shekels. Worse comes to worse, I would be down a couple of bucks. So, feeling very cool and DIY-y, I dumped my sour cream into a clean cotton towel (since cheesecloth also doesn't really happen around here) tied it up and hung it from shelf to strain overnight. When I opened my nifty white bundle in the morning I was delighted to find that what I had created did indeed have the texture of cream cheese. But when I tasted it my face fell. It tasted like Israeli sour cream, just denser, which I suppose is to be expected when you strain Israeli sour cream. But, having nothing else to do with the cheese, I made it into a cheesecake anyway, using the recipe for the classic cheesecake that I make for my family every Passover. And.... it was ok, I guess. It didn't taste horrible, but it wasn't the cheesecake I know and love. It was light and slightly watery even and strangely enough, given the acidity of Israeli sour cream, it was too sweet. Plus, it was damn ugly. It puffed up in the oven like a great cheese puff, but when I turned the oven off, it fell mightly and unevenly, giving it a wrinkled look-kinda like a topographical map. I talked it over with a friend of mine, who said that her mother-in-law successfully makes her "American" cheesecakes using her own cream cheese that she makes from strained soft white cheese, which sounds like it could work. But at this point, I have neither the time, nor patience to play with cheese again. Shavuot is almost upon us and there is much to do. (Like, you know, finish this big massive copy-edit of a 600 page book by the end of the month).
So, I leave it to you, oh intrepid readers, to take the following cheesecake recipe and run with it. If you are in America, use it. It's as simple as anything and it's one of the best damn cheesecakes I know. If you are in Israel, you have a few choices 1) weep and resign yourself to sub-par cheesecake 2) splurge on really expensive cream cheese 3) discover the secret to making your own cream cheese and then REPORT BACK TO ME IMMEDIATELY. Happy cheesecake making.

1. Preheat the oven to 350. Mix the crust ingredients together, shmushing the crumbs and sugar into the butter. Press the mixture into the bottom of a 8 inch round pan.

2. Beat the filling ingredients until smooth. (Can be done by electric mixer or by hand). Pour over the crust.

* The original recipe calls for a baking time of 40 minutes. In all the years I have made this cake, I have never had it take less than 50-60 minutes.