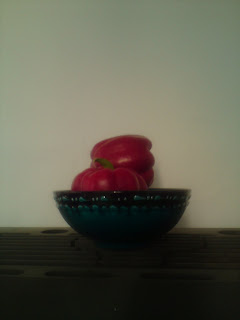 I've been living in Israel for almost eight years now, and I would like to think that my Hebrew is fairly fluent. I mostly understand what is going on around me, and even when I don't, I'm pretty good at figuring it out from the context. And yet, every day, I learn new words. (For instance, yesterday I learned that the word for "nibble" is כירסום. Who knew?)  A few weeks ago, C. asked me to bring her some גמבה-gamba from the refrigerator. I looked at her blankly. I'm pretty good at culinary terms- especially those that come up often, but I had no idea what C. wanted from me. It turns out that gamba is the word for sweet peppers. (In this case they were red, but sweet peppers come in many colors.)  It was a word I had never heard used before. As in English, in Hebrew, it is more common to differentiate peppers by their color- green pepper, red pepper, etc. I suspected that the term, gamba, for sweet pepper comes from the Arabic, since most Hebrew words that I'm unfamiliar with have their roots in the other Semitic language spoken in these parts. But no, it does not derive from the Arabic. In fact, I could not figure out where in the world it derives from. And trust me, I did some dictionary trawling. My uncle, who is a language teacher, ventured to guess that it is from Ladino. But that is just a guess. (Hungry Souls- where food and etymology meet! I'm such a geek. Sigh.)

In any case, gamba. Sweet peppers.  Good stuff. Also good, Ajvar, from Turkish by way of Serbia, made with roasted red peppers, eggplant and garlic. Once upon a time, when I wasn't quite as allergic to eggplant, I used to make this all the time. Nowadays, it graces my table less often. But don't let my allergy stop you from making this dip/sandwich spread. Make it. It's sweet and bright and surprisingly cool. You will dirty very few dishes-just a roasting pan and a food processor. You will put it on everything. I promise.

1. Heat oven to 475 degrees. Place peppers, eggplant and garlic on a baking sheet and roast; remove garlic after 10 minutes and place in a large bowl. Continue roasting peppers and eggplant until blackened and soft, about 20 minutes more, then add to bowl. Cover with plastic wrap/ place in a paper bag and let steam until cool enough to handle. Remove and discard all peels, seeds and stems.

2. In a food processor, combine the pepper, eggplant  and garlic with the oil and salt and pepper; pulse until  the mixture is almost smooth. Taste and season with salt and pepper.
Posted by Rogue Unicorn at 6:26 PM